how we
got here 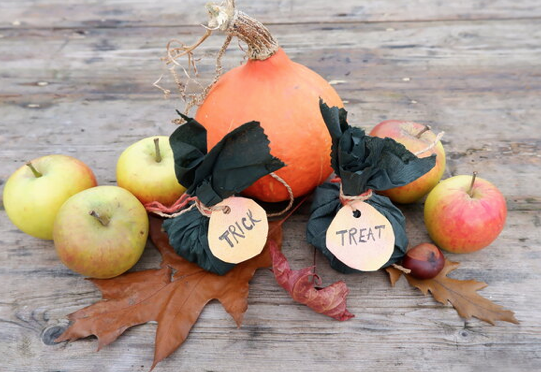 We might be in lockdown but Magic and Mischief are still about!!

We can’t go out trick or treating this year but we can still tune into the roots of Halloween and have some fun!

Halloween is a fascinating time of year, full of mischief, mirth, symbols and spooky encounters. It is rooted in the Pagan festival known as Samhain in Ireland, Scotland and the Isle of Man and Calan Gaeaf in Wales, Cornwall and Brittany. It dates back over 2000 years.

In the Celtic calendar, Samhain marks the end of the year and the beginning of winter. It is a time of death and rebirth in the natural world and is believed to be a time when the veil between the human world and the spirit world is at its thinnest. It has long been a time for tricks, games and fortune-telling.

Halloween is full of weird and wonderful traditions. Here are just a few you could try at home this year:

Snap Apples - Apples were a symbol of eternal life in Celtic times and Halloween is full of apple traditions. Tie a string from wall to wall. Then hang apples, on their own long strings, along the length. The aim is to eat your apple without using your hands and without being bumped on the head by a swinging apple! For an extra challenge, you can wear a blindfold.

Apple Bobbing – Fill a big bowel (or separate bowels if that feels right) and float lots of apples in it. Can you catch an apple in your teeth?

When I was young this game would be directly followed with a big bowl of flour with wrapped boiled sweets sticking out of it. Without using your hands and with a wet face you had to try and pull out a sweet. The results were very entertaining!

Fortune telling. - Peeling an apple in a long spiral, drop it over your shoulder and read each others future in its shape. This especially good for working out who a person might marry. The more creative and funny fortune telling the better!

Performance has long been a key part of Halloween. Since the Middle Ages, a tradition of mumming has existed in parts of Britain and Ireland. It involved going door-to-door in costume, performing short scenes or parts of plays in exchange for food or drink.

Despite the concept starting here, the term ‘trick or treat’ comes from America and has only been commonly used in Ireland and the UK since about 1980. Before that children would say “Help the Halloween Party.” They would then offer a song or a rhyme in the hope of receiving sweets or nuts. if they didn’t receive anything then a trick would be played on the residents of the house!

You can’t go to other peoples houses this year so why not take the opportunity to gather your household together around the fire or a pumpkin and make your own Halloween Party. Tell some ghost stories, sing some songs, tell some jokes and play some games.

Brave performers could be rewarded with treats and sweets. And watch out for tricks!!

Tell a story in the dark.

My friend’s mother used to tell made up stories on Halloween night with various kitchen ingredients as props. The room would be darkened or we would all wear blindfolds. As the story unfolded a bowl would be passed around the circle and we were invited to touch the contents. The one I remember best was being told a story about an eyeball while touching what I later realised was a peeled hard-boiled egg.

We love the Knarly Monster and Skin and Bones

This is Halloween hymn from long ago. It can be sung at a faster tempo but this version is good for learning the words.

Your submission has been received!